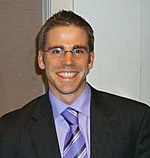 
"Search for high energy axions with the CAST calorimeter."


Miller's research as an undergraduate in the Kavli Institute for Cosmological Physics at the University of Chicago involved the construction, commissioning and data analysis of a gamma-ray calorimeter for the CERN Axion Solar Telescope (CAST) experiment. The CAST experiment aims to find evidence of a new particle, the axion, by using a decommissioned LHC dipole magnet to convert such particles into photons. Axions are hypothetical pseudoscalar bosons predicted to exist in various extensions of the Standard Model of particle physics, but most notably in the Peccei-Quinn solution to the Strong-CP problem. Finding no statistically significant signal above background, the data allowed Miller to establish improved limits on the axion-to-photon coupling strength and the axion mass in the 0.1 to 3 eV mass range. Currently, Miller is heavily involved in the commissioning of the ATLAS Tile Calorimeter for the LHC at CERN and plans to attend the graduate program in physics at Stanford University with the help of a National Science Foundation Graduate Research Fellowship.