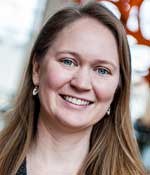 
"For the demonstration of outstanding potential in the field of quantum nanophotonics."


Maiken H. Mikkelsen, Ph.D., received her B.S. in physics from the University of Copenhagen (Denmark) in 2004, and her Ph.D. in physics in 2009 from the University of California, Santa Barbara, where she worked on optical control of single electron spins in semiconductor quantum dots. A postdoctoral fellowship at the University of California, Berkeley, where she conducted experimental studies of quantum optics and plasmonic structures, was followed by a move in 2012 to Duke University (Durham, N.C.) where Dr. Mikkelsen is the Nortel Networks Assistant Professor of Electrical and Computer Engineering and an assistant professor of physics. Dr. Mikkelsen’s primary research interests are quantum nanophotonics, light-matter interactions in artificially structured nanoscale materials, and spin phenomena in the solid state. Among the honors Dr. Mikkelsen has received are the National Science Foundation CAREER Award, the Air Force Office of Scientific Research Young Investigator Award, the Army Research Office Young Investigator Award, and the Cottrell Scholar Award from the Research Corporation for Science Advancement. Dr. Mikkelsen is a member of the American Physical Society, the Optical Society, the Materials Research Society, the American Chemical Society, the Society of Photo-Optical Instrumentation Engineers, and the Institute of Electrical and Electronics Engineers.