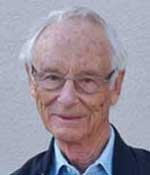 
"For his significant and sustained contributions to technical and policy issues pertaining to nuclear weapons, nuclear terrorism, energy and environmental impact; for mentoring generations of students and colleagues on these issues; and for efforts to increase public understanding and awareness on these issues."

Dr. May is Director Emeritus of the Lawrence Livennore National Laboratory. He has held a number of government advisory positions, was a member of the US delegation to the Strategic Arms Limitations Talks, and is a Fellow of the American Physical Society and the American Association for the Advancement of Science.

May received the Distinguished Public Service and Distinguished Civilian Service Medals from the Department of Defense, and the Ernest Orlando Lawrence Award from the Atomic Energy Commission, as well as other awards. Beside security related work, he has published work in astrophysics and energy.

May's current research interests are in nuclear security, energy, environment and terrorism, and the relation of nuclear weapons and foreign policy. Currently he is working on follow-up to the Fukushima accident and other aspects of the future of the nuclear energy industry.