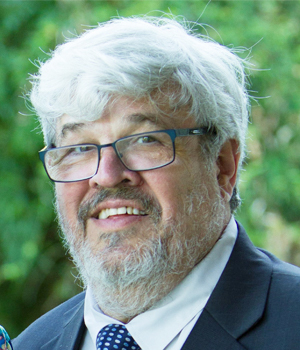 
"For pioneering research into the nature of turbulence in space and astrophysical plasmas, which has led to major advances in understanding particle transport, dissipation of turbulent energy, and magnetic reconnection."


William H. Matthaeus, Unidel Professor of Physics and Astronomy at the University of Delaware, received his BA degree in Physics and Philosophy from the University of Pennsylvania in 1973. He received a Ph.D. from William and Mary in 1979. He currently works in turbulence theory, plasma physics, fluid mechanics, and statistical mechanics, with applications to solar wind and coronal phenomena. He employs analytical, computational, and observational methods to study the transport of turbulence and turbulence cascade, which, along with the associated complex kinetic plasma physics response, leads to dissipation and heating in space plasmas. He has developed novel approaches in data analysis methods and computational methods. Dr. Matthaeus is a recipient of the James B. Macelwane Award from the American Geophysical Union and the University of Delaware College of Arts & Sciences Scholarship Award. He is Fellow of the American Physical Society, The Institute of Physics, and the American Geophysical Union. He is also Director of the Delaware NASA Space Grant Consortium and the Delaware NASA EPSCoR program, and Co-investigator on spacecraft missions, including Cluster/PEACE, the Magnetospheric Multiscale mission, the Parker Solar Probe ISOIS instruments, and the Interstellar Mapping and Acceleration Probe. For the past decade, he has been lead organizer of the Arcetri Workshop on Plasma Astrophysics, hosted by the University of Florence, Italy.