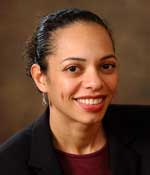 
"For innovative experiments that elucidate the electronic interactions and correlations in low-dimensional systems, in particular the use of local gates and tunnel probes to control and measure the electronic states in carbon nanotubes and graphene."


Nadya Mason received her bachelor’s degree in physics from Harvard University in 1995 and her doctorate in physics from Stanford University in 2001. She engaged in postdoctoral research at Harvard University, where she was a Junior Fellow in the Harvard Society of Fellows. Dr. Mason joined the Department of Physics at the University of Illinois at Urbana-Champaign as an assistant professor in 2005, and was promoted to associate professor in 2011. A condensed matter experimentalist, Mason focuses on electron behavior in low-dimensional materials such as carbon nanotubes, graphene, and nano-structured superconductors. Her projects include studies of superconducting bound states in quantum dots, tunneling spectroscopy of carbon nanotubes and graphene, and phase transitions in nano-patterned 2D superconductors. Dr. Mason’s research is relevant to the fundamental physics of small systems, as well as to applications involving nano-scale electronic elements. Dr. Mason was a recipient of a National Science Foundation CAREER award in 2007, was named a 2008 Emerging Scholar by Diverse Issues in Higher Education magazine, and received the 2009 Denise Denton Emerging Leader Award.