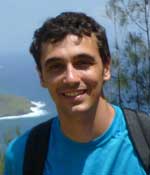 
"In recognition of a definitive theoretical treatment of microscopic space-charge effects in particle beams, and accompanying innovative experimental tests involving the first use of coherent imaging in microbunched beams."


Agostino Marinelli received his undergraduate degree in 2005 and master's degree in 2007 from the University of Rome, La Sapienza, in electrical engineering and engineering sciences respectively. There he completed his research thesis under the mentorship of Professor Luigi Palumbo. He moved to the United States in 2008 to pursue his doctoral degree in physics at the University of California, Los Angeles, which he completed in 2012 under the supervision of Professor James B. Rosenzweig. His research interests lie in the physics of collective instabilities in high-brightness electron beams, and x-ray free-electron lasers. He is currently an associate staff scientist at the SLAC National Accelerator Laboratory, where he is involved in the research and development program for the Linac Coherent Light Source. Marinelli has also received the 2014 Frank Sacherer Prize from the European Physical Society Accelerator Group.