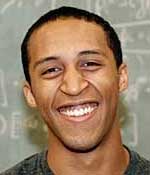 
"Rotational Dynamics of Anisotropic Particles in Turbulence: Measurements of Lagrangian Vorticity and the Effects of Alignment with the Velocity Gradient."


Guy Marcus graduated from Wesleyan University in May 2013 with a B.A. in Physics (high honors) and in Science in Society, and a Certificate in Informatics and Modeling. For his honors thesis, conducted under the supervision of Professor Greg Voth, he devised a method for 3D printing small anisotropic particles and developed new image processing algorithms to extract the particles’ time resolved solid body rotation from experimental video data. A manuscript presenting his experimental results will soon be submitted for publication.

Throughout his undergraduate years, Guy also worked with Professor Reinhold Blümel on several theoretical and computational projects regarding the dynamics of charged particles in a Paul trap. The early parts of these studies on antihydrogen synthesis earned him an Honorable Mention for the Barry M. Goldwater Scholarship and were published in JURP. More recent work has forcused on the microscopic mechanism of heating in the Paul trap.

Guy began working towards his PhD in Physics at Johns Hopkins University in Fall 2013, where an NSF Graduate Research Fellowship and a Ford Predoctoral Fellowship fund his research. He will continue working on condensed matter physics, most likely with a theoretical or computational bent. (Details on his webpage: http://www.guygmarcus.com)

Guy also will continue to pursue his interests in STEM outreach and education, which were fostered during his time as SPS President at Wesleyan. He is a member of the Phi Beta Kappa honor society and a supporting member of the APS, AAAS, and NSBP.