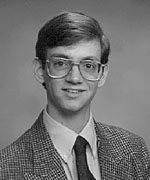 
"For his achievements as an undergraduate student at Stanford University, particularly his research on 'Two-Dimensional Electron Transport and Magnetoresistance Effects in a Random Magnetic Dipole Array'."


As a senior at Stanford University, Mancoff designed and carried out an experiment to study the magneto-transport of a two-dimensional electron gas system under a random dipolar magnetic field. While the system forms the analogical basis for the current understanding of the quantum Hall system at even denominator filling fractions, there has been little experimental work to date in that area. In the course of this project, Mancoff mastered semiconductor microfabrication techniques, including photolithography, mask design, and wire-bonding, as well as low- temperature experimental techniques. He also aided graduate students in the operation of the laboratory's helium liquefier and the transfer of liquid helium into a storage dewar for operating the dilution refrigerator necessary for his measurements.

Mancoff's experiment revealed that the magneto-resistance of the two-dimensional electron gas increases one-order of magnitude under the influence of the random magnetic field. The experiment's importance may one day move beyond the even-denominator quantum Hall effect to more practical application of the giant magneto-resistance. He presented his findings as an invited speaker during a symposium on mesoscopic physics at the 1995 APS March Meeting in San Jose, California, perhaps the first undergraduate student to be invited to speak at an APS meeting.