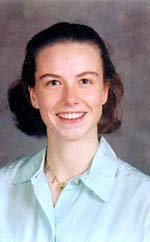 
"A Kondo Box: Coulomb Blockade and the Kondo Effect in Iron-doped Copper Nanoparticles."


Heather Lynch received an A.B. degree in physics with a certificate in materials science engineering from Princeton University in 2000. Ms. Lynch has been studying the Kondo effect for over three years, starting at Cornell University with the late Dr. Barbara Cooper, followed by work with Dr. Duncan Haldane at Princeton University, and finally with her present experiment under Dr. Lydia Sohn. For her senior thesis, she studied spin-polarized tunneling through doped metallic nanoparticles. Using a wide range of semiconductor processing techniques, she successfully fabricated 2-3 nm radius aluminum nanoparticles which she studied using current-voltage characteristics at low-temperatures. She also wrote a computer simulation to model these nanoparticle systems and used this simulation to explore the relevant parameters involved in the experiment. Ms. Lynch proceeded with these techniques to fabricate iron-doped copper nanoparticles, which she is using to study the Kondo effect. In addition to investigating many of the experimental issues involved with this and other Kondo systems, she discovered unexpected phenomena such as nanoscale rectifiers and hopping transport through her devices.

Ms. Lynch has been awarded fellowships from the National Science Foundation and the Department of Defense and is pursuing her graduate studies at Harvard University with a fellowship from Lucent Technologies.