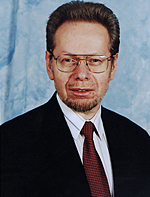 
"For his contributions to fundamental understanding of structure, morphology and properties in technologically important polymers."


Andrew J. Lovinger received his BS degree in 1970, MS in 1971, and PhD in 1976, all in Chemical Engineering and Applied Chemistry from Columbia University. In 1977 he joined the Technical Staff at Bell Laboratories. He was promoted to Distinguished Member of Technical Staff in 1985 and served as Head of the Polymer Research Department from 1985 to 1994. In 1995 he moved to the National Science Foundation, but continued part-time research at Bell Laboratories until his retirement in 2001 (and has continued thereafter as a Consultant). At the National Science Foundation, Dr. Lovinger was Senior Staff Scientist (1995-1998) and has been serving as Director of the Polymers Program in the Division of Materials Research from 1995 to the present time.

His research has focused on correlation between structure, morphology, and properties of polymeric and organic materials. Major areas of research over the years have been piezoelectric and ferroelectric polymers, high-temperature/high-strength polymers, and crystallization, phase transformations, and morphology of a variety of materials. His most recent contributions have been on polymeric and organic thin-film transistor materials for "plastic electronics".

Dr. Lovinger is a Fellow of the APS and winner of its Dillon Medal (1985). Other distinctions include the National Science Foundation Director's Award for Program Management Excellence (2000), the Bell Laboratories Distinguished Technical Staff Award (1985), Fellowship in the American Association for the Advancement of Science (1988), and the Frazer Price Memorial Award of the University of Massachusetts (1993). He has been an Associate Editor of the ACS journal Macromolecules since 1988.