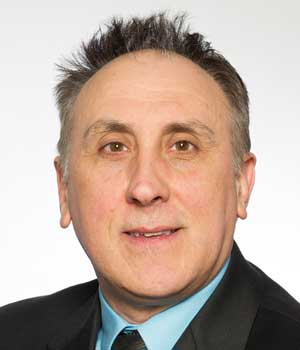 
"For contributions to both numerical relativity, conducive to the solution of the binary black hole problem, and the understanding of the first detection of gravitational waves and service to the Hispanic scientific community, including the establishment of the Center for Gravitational Wave Astronomy, the University of Texas at Brownsville in 2003."


Carlos O. Lousto, known for his work on black hole mergers, is a professor in the School of Mathematical Sciences in Rochester Institute of Technology (RIT), and co-director of the Center for Computational Relativity and Gravitation. In 1987, he received his M.S. in astronomy from the National University of La Plata where he finished his Ph.D. in astronomy in 1987. He completed a second Ph.D. in physics at the University of Buenos Aires in 1992, studying the Quantum Field Theory in curved spacetimes. Lousto’s extensive research experience ranges from observational astronomy to black hole perturbation theory and numerical relativity to string theory and quantum gravity. He has authored and co-authored over 200 papers about his research, which is funded by the National Science Foundation and NASA. Lousto is a key author of the breakthrough to solve the binary black hole problem; his research showed that supermassive black holes can be ejected from most galaxies at speeds of up to 5000 km/s. He also performed challenging supercomputer simulations of small mass ratio black hole binaries (up to 100:1) and from large separations (up to 100M) and studied the dynamics of highly spinning black holes. Lousto designed the Funes (the University of Texas at Brownsville), NewHorizon, BlueSky, and RIT Green Prairies supercomputer clusters to perform binary black hole simulations, using them to support the first detection of gravitational waves from the merger of two black holes in 2015. In 1991 Carlos Lousto was honored with an Alexander von Humboldt Foundation fellowship. In 2006 and in 2016 his research was acknowledged in the U.S. Congressional records. In 2012, Lousto was elected a fellow of the American Physical Society and received the 2016 Special Breakthrough Prize in Fundamental Physics.