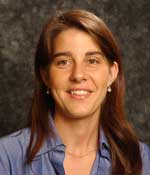 
"For high-resolution angle-resolved photoemission spectroscopy and imaging studies of the cuprate superconductors and graphene that elucidate their electronic properties."


Alessandra Lanzara received her Ph.D. in Physics from University of Rome La Sapienza in 1999, and her Laurea (equivalent to M.S.) from the same University in 1995.
In 2002 she joined the Physics Department of the University of California, Berkeley as an Assistant Professor and became Associate Professor in 2006.  She has also a joint Faculty appointment in the Materials Sciences Division of the Lawrence Berkeley National Laboratory.


Her main research interests lie on the frontier aspects of condensed matter physics, motivated by the search for new states of matter with main focus on high temperature superconductivity and Dirac materials. Her main contributions to these fields are: The discovery of a universal energy scale in cuprates superconductors, that might hide the secret for superconductivity; and the discovery of a new way of band gap engineering of graphene through graphene/substrate interaction, a fundamental step toward graphene electronics.  She is also pushing the frontier of photoemission spectroscopy to the time and spin realm, with the development of a novel concept of electron analyzer for spin detection.

Because of this she has been awarded the W. McMillan Award (2003) and the Shirley Award (2007) and was elected Fellow of the American Physical Society (2008). Other prestigious awards are: Career Award, National Science Foundation (2003-2008); Sloan Research Fellow (2004) and Distinguished Women in Physics Lecture (2007).

Dr. Lanzara is author of more than 100 papers in refereed journals and co-inventor of three patent disclosures. Three of her papers have been identified by the citation tracking algorithm of the Institute for Scientific Information as among the most cited recent papers in its periodic surveys.