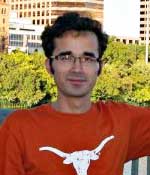 
"For his courage in refusing to use his physics knowledge to work on projects that he deemed harmful to humanity, in the face of extreme physical and psychological pressure."


Omid did his bachelors in Sharif University of Technology in Tehran, Iran known as MIT of Iran. He ranked 29 out of about 400 thousand participants in a nationwide university entrance exam. He studied Applied Physics and Mechanical Engineering and graduated in 2005. He received a scholarship to pursue his graduate research and studies in Photonics from Institute of Photonic Sciences (ICFO) in Barcelona, Spain in a joint program with three local universities there. He worked experimentally on Optical Parametric Oscillators. After obtaining his master he continued to finish his courses and research work for his PhD dissertation in ICFO and before defending, he moved to University of Texas at Austin to pursue his PhD studies in Physics mainly on Laser-Plasma Interaction, a resourceful place known for its professors and high power laser facilities. Omid is proudly a member of APS, OSA, SPIE and IEEE.