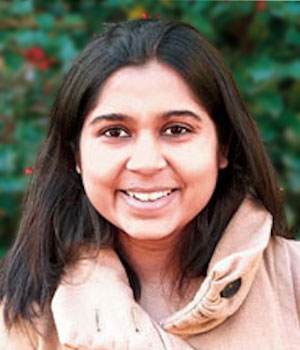 
"For seminal theoretical work on novel phases of many-body localized and Floquet systems, including demonstrating the absolute stability of a time crystal in such systems."


Vedika Khemani is an assistant professor of physics at Stanford University. She received her bachelor’s degree in physics from Harvey Mudd College in 2010. Her senior thesis on gravitational holography was awarded the Thomas Benjamin Brown Memorial Award. Her interests turned to condensed matter theory while pursuing her doctoral studies at Princeton University, advised by Professor Shivaji Sondhi. Her graduate work introduced the notion of non-equilibrium phases of matter in many-body Floquet systems – including the discovery of a novel phase of matter now known as the Floquet time-crystal – and was awarded the Joseph Taylor Fellowship and the Kusaka Prize. After graduating from Princeton in 2016, she spent her postdoctoral years as a Junior Fellow at the Harvard Society of Fellows. Since starting at Stanford in 2019, she has been awarded a Terman Fellowship, an Alfred P. Sloan Fellowship, an Early Career Award from the Department of Energy, and the William L. McMillan Award for condensed matter physics. Prof. Khemani’s research interests in quantum dynamics, many-body quantum entanglement, and emergent properties of out-of-equilibrium quantum matter represent a burgeoning research direction of interest to several subfields of physics including condensed matter, quantum information, quantum gravity and quantum engineering.