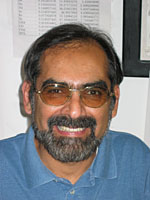 
"For his challenging and sophisticated experiments in electron-atom collisions that have provided significant tests of atomic theory and for his energetic, sustained mentoring of students in his research."