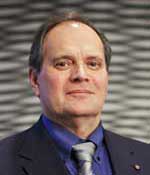 
"For spearheading the development of ab-initio nano-photonics."


John D. Joannopoulos received his B.A. and Ph.D. in Physics from the University of California, Berkeley in 1968 and 1974, respectively. He is on the Physics Faculty of at MIT since 1974 and was awarded the Francis Wright Davis Professor of Physics Chair in 1996. He was appointed Director of the Institute for Soldier Nanotechnologies in 2006.

Professor Joannopoulos' research spans two major directions. The first is devoted to creating a realistic and microscopic theoretical description of the geometric, electronic and dynamical structure properties of material systems. The second involves development of a new class of materials called photonic crystals, designed to control light with remarkable facility and produce effects that are impossible with conventional optics.