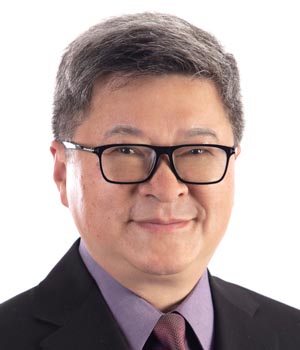 
Terry Hwa is the Presidential Chair and Distinguished Professor of Physics at UC San Diego, with joint appointment in the Division of Biological Sciences. Hwa develops theoretical and experimental approaches to gain quantitative, predictive understanding of living systems. He is particularly known for quantitative studies of bacterial physiology, with the discovery of phenomenological laws and formulation of theories connecting molecular interactions to bacterial behaviors. Hwa grew up in Shanghai, China, and immigrated to the US during high school. He received his B.S. degree in Physics, Biology, and Electrical Engineering from Stanford University in 1986, and was the recipient of the APS Apker Award that year. Hwa obtained his Ph.D. in Physis from MIT in 1990, with a combined theoretical and experimental thesis in soft matter and nonequilibrium dynamics. He continued his post-doctoral research in statistical physics and superconductivity in Harvard University, going on to the Institute for Advanced Study and SUNY Stony Brook, before joining the Physics faculty with tenure at UC San Diego in 1995. Hwa is a champion of interdisciplinary research. In 2001, he initiated an extensive program at the Kavli Institute of Theoretical Physics in Santa Barbara that is regarded as a watershed event in bringing physicists to post-genome biology. Hwa is a fellow of the American Physical Society, a fellow of the American Academy of Microbiology, a member of the National Academy of Sciences.