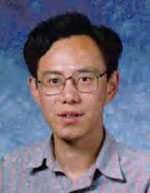 
"For his analysis of radiation damping and quantum excitation in novel accelerator configurations."


Dr. Huang was born and raised in China. He first studied at Beijing University as an undergraduate in physics and transferred to California Institute of Technology two years later. He received his B.S. in physics from Caltech in 1992 and entered the graduate program at Stanford University, receiving his Ph.D. in physics in 1998. Under the guidance of Prof. Ron Ruth at Stanford Linear Accelerator Center, he carried out his thesis research on radiative cooling of relativistic electron beams. This research centered on both fundamental aspects and innovative methods of generating ultra-low emittance electron beams, and has contributed to three Physical Review Letters articles in addition to numerous conference proceedings papers.

In May 1998, Dr. Huang joined the Advanced Photon Source at Argonne National Laboratory as a staff physicist. His current research is in the interaction of photons and electrons, with emphasis towards free-electron laser development.