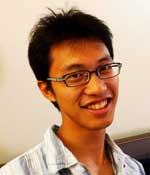 
Chia Wei Hsu was born in Taipei, Taiwan. He received his B.A. in Physics and Mathematics from Wesleyan University in 2010, and is currently pursuing his Ph.D. in Physics at Harvard University. At Wesleyan, Chia Wei studied properties of DNA-linked nanoparticles using computational and analytical approaches under the guidence of Professor Francis W. Starr. In 2007, he discoverred that nanoparticles with four DNA strands can form a hierarachy of interpenetrating structures, resulting in a multitude of distinct phases. Subsequently he found that these interpenetrating structures stem from a combination of short-range repulsion and long-range attraction among particles. In his senior year, he worked on the development of a theoretical description for the clustering and assembly kinetics of these nanoparticles. In 2009, he worked briefly worked with Professor Yeng-Long Chen at Academia Sinica, where he studied the interplay between soft deformable particles and fluid flow in a microchannel. He is the author of five publications. Chia Wei was supported by the Freeman East Asian Scholarship for his four years at Wesleyan. He graduated from Wesleyan first in the class, received High Honors in Physics, and was inducted into the Phi Beta Kappa Society.