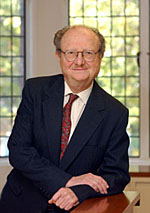 
"For contributions to a wide range of topics in statistical and condensed matter physics; including the theory of dynamic scaling close to critical points, the theory of pattern formation in nonequilibrium systems, and density functional theory."


Pierre Hohenberg received his AB (1956) and PhD (1962) in Physics from Harvard University. After postdoctoral study at the Institute for Physical Problems in Moscow and the Ecole Normale Superieure in Paris, he joined AT&T Bell Laboratories where he was a Member of Technical Staff from 1964 to 1995. During the period 1974-77 he was also on the faculty of the Technische Universitaet in Munich Germany. In 1995 he moved to Yale University as Deputy Provost for Science and Technology a position he currently occupies. His research prior to 1995 was in low-temperature and condensed matter theory, and statistical physics, in particular the study of critical phenomena near phase transitions and nonequilibrium pattern formation. In his current position he oversees the science and engineering departments of the Yale's Faculty of Arts and Sciences and is the senior research officer of the University. Hohenberg is a fellow of the APS, the AAAS, the NY Academy of Sciences and the Connecticut Academy of Arts and Sciences, as well as a member of the American Academy of Arts and Sciences and the National Academy of Sciences.