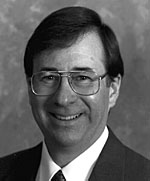 
"For his research contributions in lasers and atomic physics, fundamental symmetries, and nonlinear dynamics, and for his leadership and energy in guiding Amherst College students in his research programs."


Dr. Hilborn received his BA degree from Lehigh University in 1966 and his Ph.D. in physics from Harvard University in 1971. Following a two-year postdoctoral position at the State University of New York at Stony Brook, he taught physics for thirteen years at Oberlin College. In 1986 he moved to Amherst College as Professor of Physics where, in 1993, he was named Amanda and Lisa Cross Professor. He has been a visiting faculty member at the University of California at Santa Barbara, Taiyuan Technical University in the People's Republic of China, and at Georgia Institute of Technology. During 1996 he served as President of the American Association of Physics Teachers. He is also a member of the American Institute of Physics Governing Board and the Council of the American Physical Society. With support from Research Corporation, the National Science Foundation, and the Howard Hughes Medical Institute, his research in laser spectroscopy and nonlinear dynamics has involved over thirty undergraduate students. In 1994, Oxford University Press published his book Chaos and Nonlinear Dynamics: An Introduction for Scientists and Engineers. His book has been recognized by Choice magazine as one of the outstanding academic books of 1995.