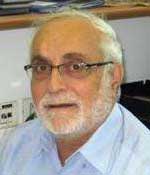 
"For pioneering new approaches to the study of complex systems, using the complementary approaches of nonlinear dynamics and statisical physics, and for communicating the excitement of this new field to diverse audiences"

Havlin and his collaborators made fundamental contributions in statistical physics that opened new avenues of active research in several areas, among which are the following:

ii) Discovery of long range correlations in DNA sequences and in) physiological data; the related development of the DFA method for analyzing non-stationary records.

(iii) Demonstration that many networks belong to a new universality class due to their heterogeneous topology, represented e.g., by the absence of a percolation threshold and novel critical exponents.

Havlin has been honored by the Weizmann Prize for Exact Sciences (2009) the APS Nicholson Medal for Human Outreach (2006), the Excellence National Center Award, Israel (2004), the Humboldt Senior Scientist Award (Germany, 1992), and the Landau Prize (Israel,1988).