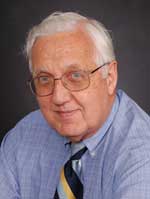 A. Brooks Harris
University of Pennsylvania


"For his many contributions to the statistical physics of random systems, including the formulation of the Harris criterion, which has led to numerous insights into a variety of disordered systems."


I obtained my undergraduate degree at Harvard in 1956 and my Ph. D. from Harvard in 1962 in experimental physics under H. Meyer. After my Ph. D. I retrained myself as a theorist, during 3 years at Duke University, and then a year at Harwell (U. K.) with J. Hubbard. I then joined the faculty at the University of Pennsylvania, where I have been ever since. I was a Sloan fellow (1967-9) and a Guggenheim fellow (1972-3). I have visited Sandia (1974) and NIST (2002-), and the Universities of British Columbia (1976), Oxford (1973, 1986, and 1994), Tel Aviv (1987, 1995), and McMaster (2005). My interests have included orientational ordering in solid molecular hydrogen (some with H. Meyer), critical properties of numerous random systems (often in collaboration with T. C. Lubensky), the crystal structure and dynamics of fullerenes (often with T. Yildirim), spin dynamics of frustrated magnets (with A. J. Berlinsky and more recently with A. Aharony, O. Entin-Wohlman, and T. Yildirim) and the symmetry properties of frustrated magnets which exhibit simultaneous magnetic and ferroelectric ordering. The ``Harris'' criterion was developed during my 1973 visit to Oxford.