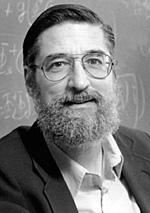 
"For his wide-ranging contributions to statistical physics and quantum fluids, especially the elucidation of the quantum Hall effect and other low-dimensional electronic phenomena; and for his exemplary leadership in bringing theory to bear on the understanding of experiments."


Dr. Halperin received his A.B. degree in Physics from Harvard College, in 1961, and his Ph.D. in Physics from the University of California, Berkeley, in 1965. Following a one-year NSF postdoctoral fellowship at the Ecole Normale Superieure in Paris, he was a member of the technical staff at Bell Laboratories from 1966 to 1976. He has been a member of faculty of the Physics Department of Harvard University since 1976. He served as Chair of the department from 1988-1991, and was appointed Hollis Professor of Mathematics and Natural Philosophy in 1992. He is also Scientific Director of the Harvard Center for Imaging and Mesoscale Structures.

Dr. Halperin's research interests include various aspects of the theory of condensed matter systems and statistical physics. The largest portions of his current research are in the areas of quantum Hall systems (i.e., two-dimensional electron systems at low temperatures in strong magnetic fields), and electronic properties of mesoscopic systems. Current and past research interests also include the theory of quantum antiferromagnets in one and two dimensions, superconductivity, transport in inhomogeneous systems, low-temperature properties of glasses, melting and other phase transitions in two-dimensional systems, and the theory of dynamic phenomena near a phase transition.