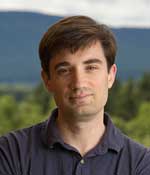 
"For his ground breaking experimental investigations of Bose-Einstein condensates and the dynamics of quantum vortices and for his enthusiastic inclusion of undergraduates in his research."


David Sumner Hall is Professor of Physics at Amherst College. He earned an A.B. in Physics from Amherst College in 1991, and a Ph.D. from Harvard University in 1997. After two years as a postdoc at JILA and the University of Colorado, he returned to Amherst as a member of the faculty in 1999. With his students, he constructed an apparatus to create Bose-Einstein condensates - the first at an undergraduate institution. His research with his students, supported over the years by the Research Corporation and the National Science Foundation, has focused on the dynamics of multicomponent condensates and quantized vortices. He has supervised 16 undergraduate theses and involved over 30 research students, including a high school student, in his laboratory; many of these students appear as co-authors on published papers or in conference proceedings. Professor Hall's past and present memberships include AAAS, APS, AAPT, and Sigma Xi.