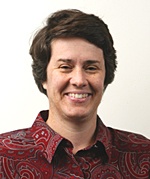 
"For her important contributions to semiconductor materials and semiconductor device physics, and for enthusiastic and sustained involvement of undergraduates in her research efforts at Fairfield University."


Haegel was Associate Professor and Professor of Physics at Fairfield University in Fairfield, Connecticut from 1993-2003. She received her BS degree in metallurgical engineering and materials science from the University of Notre Dame and a PhD in materials science from the University of California, Berkeley. She worked as a post-doctoral scientist at Siemens Research Laboratories in Erlangen, Germany and then joined the faculty in the Department of Materials Science and Engineering at UCLA in 1987. Effective July 2003, he became professor of physics at the Naval Postgraduate School in Monterey, CA. Haegel has been the recipient of a NSF Presidential Young Investigator Award and a David and Lucile Packard Fellowship in Science and Engineering. She has received subsequent fellowships from the Kellogg and Alexander von Humboldt Foundations. In 1989 she was awarded the TRW Excellence in Teaching Award at UCLA and the Teacher of the Year Award at Fairfield University in 1997. She is a member of the Board of Trustees of the University of Notre Dame. A member of APS since 1983, Haegel's research interests are in semiconductor materials, with emphasis on high resistivity semiconductors and materials for far-infrared detection. She is involved in the development and modeling of photoconductors for use on infrared satellites and interested in new techniques for the optical imaging of electrical transport.