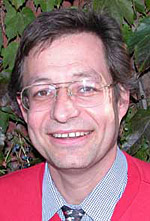 
"For their outstanding effort at creating a successful and renowned optical theory research program at Illinois State University, and for their exemplary involvement of undergraduates in this research."


Rainer Grobe is Distinguished Professor of Physics at Illinois State University. After completing his Ph.D. at the University of Essen in 1989, he worked six years at the University of Rochester before coming to Illinois State in 1995. He is a Fellow of the APS and his research activities have been funded by various agencies including the NSF, Fulbright Foundation, Deutsche Forschungsgemeinschaft, Humboldt Foundation and Research Corporation. He holds a patent in optical pulse propagation and has published about 120 peer-reviewed papers  31 with undergraduate coauthors.

Together with Prof. Q. Su, he has supervised the research work of about 35 undergraduate students, some of whom have won national awards. One of his students (Robert Wagner) received the APS LeRoy Apker Award in 2001. In 1997 Grobe received the Undergraduate Computational Engineering and Science award from the DOE for his contributions to computational physics education. He has served on national committees, organized and chaired international conferences, and serves as referee for ten journals and as reviewer for five funding agencies. Since 1998 he has served as the Chair of the Distinguished Traveling Lecturer Committee of the APS-DLS.