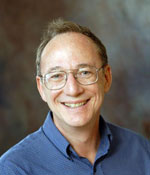 
"For pathbreaking and elegant experiment that elucidate the structure and dynamics of polymers and liquids confined by surfaces."


Steve Granick has been on the faculty of the University of Illinois since 1985, where he is currently Founder Professor of Materials Science and Engineering, as well as Professor of Chemistry, Physics, and Chemical and Biomolecular Engineering. He graduated from Princeton in 1978 with a B.A. cum laude and in 1982 earned his Ph.D. in chemistry at the University of Wisconsin, working with John Ferry. As a postdoc, he worked first with Pierre-Gilles de Gennes at the Collège de France and then with Matthew Tirrell at the University of Minnesota. Honors include the Paris-Sciences Medal, Chair of the APS Polymer Physics Division, member of the editorial board of numerous journals, and Guest Professor at Peking University, at Zhejiang University, and at University of Science and Technology of China. Member of the American Physical Society, American Chemical Society, Biophysical Society. He has more than 200 refereed publications and has long-standing research interests in tribology as well as in the dynamics of polymers, complex fluids, colloids, and phospholipid membranes.