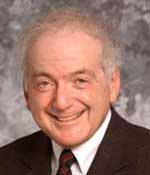 
Allen Goldman was born in the Bronx and attended the Bronx High School of Science. He received his A. B. in physics and chemistry from Harvard University in 1958 and received his Ph. D. in physics from Stanford University in 1965. After a brief period as a postdoc at Stanford, he joined the physics faculty at the University of Minnesota as an Assistant Professor. He is now a Regents Professor. The focus of Professor Goldman’s research is on electronic transport properties of superconductors, with emphasis on the effects of disorder and dimensional constraints. This work includes studies of quantum size effects, electronic localization, topological phase transitions, and quantum phase transitions such as the superconductor-insulator transition. Current interests also include the investigation of the properties of high-Tc superconductors and superconducting nanowires, and the electrostatic control of the ground states of novel materials. Professor Goldman is a Fellow of the American Physical Society and the American Association for the Advancement of Science. He is a recipient of the Fritz London Memorial Prize for low temperature physics and is a member of the National Academy of Sciences.