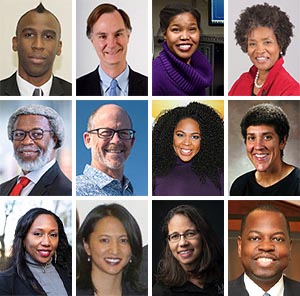 
"For groundbreaking analysis revealing sources of persistent underrepresentation of African-Americans in physics and astronomy; recommendation of data-driven, systemic strategies to increase the number of African-American physics bachelor’s degree recipients; and ways to catalyze cultural change."

Physics Professor and Dean of Institutional Diversity, Reed College, Dr. James has served as both a member and chair of the APS Committee on Minorities in physics for two years and was instrumental in launching the APS National Mentoring Community. She has vast experience with diversity and committee/task group dynamics.

Edmund Bertschinger is a Professor of Physics at MIT with an affiliation in the Program in Women’s and Gender Studies. He is a scholar-activist-administrator for diversity, equity, and inclusion in higher education. Dr. Bertschinger has served as both Physics Department Head and MIT’s inaugural Community and Equity Officer. He is passionate about shifting the culture of STEM fields to be inclusive and equitable for everyone.

Brian Beckford is currently an assistant research scientist following a two-year President’s Postdoctoral Fellowship (PPFP) at the University of Michigan, where he served as the former chair of the physics department’s Diversity, Equity, and Inclusion committee. He works on the KOTO experiment, conducted at the J-PARC facility in Japan, which is designed to measure the rare CP-violating decay of a neutral long-lived kaon into a neutral pion and a neutrino anti-neutrino pair. Prior to his position at Michigan, Dr. Beckford was the American Physical Society (APS) Bridge Program Manager, overseeing that multimillion dollar program to increase the production of African Americans earning PhDs in physics.

Associate Professor of Physics at Rowan University and strong promoter of diversity in physics at the undergraduate level, Dr. Dobbins earned her degrees at both HBCUs (Lincoln U.) and Predominantly White Institutions (U. Penn and Penn State). Following these experiences, she returned to her HBCU roots as a faculty member at Grambling University, and simultaneously held a position at Louisiana Tech, before landing at Rowan. She is fiercely dedicated to her undergraduate students and participates in diversity panels around the country.

Sharon Fries-Britt is a Professor of Higher Education, at the University of Maryland in the Department of Counseling, Higher Education and Special Education (CHSE). She studies the experiences of high achieving Blacks in higher education and underrepresented minorities (URMs) in STEM fields. Her recent work examines within group experiences of native and non-native Blacks in higher education as well as issues of campus racial climate. Dr. Fries-Britt is one of the faculty co-leads and authors of the ACE report Speaking Truth and Acting With Integrity Confronting Challenges of Campus Racial Climate. Dr. Fries-Britt’s research has been funded and supported by the Lumina Foundation, National Society of Black Physicists and the National Science Foundation where she is co-principle investigator to examine the academic trajectories of Black transfer engineering students from community colleges. A recipient of numerous awards she was named a 2019-2020 University of Maryland Distinguished Scholar Teacher.

A world-renowned theoretical physicist, Dr. Gates is the Brown Theoretical Physics Center Director and Ford Foundation Physics Professor at Brown University. This follows his appointment as the John S. Toll professor of physics at the University of Maryland, College Park. He has served on national committees including the U.S. Presidential Council of Advisors on Science & Technology (PCAST) and the National Commission on Forensic Science. Throughout his career, he has been an outspoken national advocate for diversity in physics and was cited regarding an amicus brief to the Supreme Court on the value of minorities in physics. Currently Dr. Gates is a Fellow and vice-President of the American Physical Society (APS) also a Fellow and Past-President of the National Society of Black Physicists (NSBP).

Jedidah Isler is currently the Assistant Director of STEM Opportunity & Engagement at the White House Office of Science and Technology Policy. Dr. Isler was formerly an Assistant Professor of Physics & Astronomy at Dartmouth College. She was an NSF Postdoctoral Fellow at Vanderbilt University and was the first African American woman to receive a PhD in astrophysics from Yale University. She is an award-winning astrophysicist, TED Fellow, and a nationally recognized speaker and advocate for inclusive STEM education. Dr. Isler is also the founder of VanguardSTEM, an online community and platform that centers the experiences of women of color and non-binary people of color in STEM.”

Maria (Mia) Ong, Ph.D., is a Senior Research Scientist at TERC, a science and mathematics education non-profit organization in Cambridge, MA. For over twenty years, she has conducted empirical research focusing on women of color in higher education and careers in STEM and has led the evaluation of several STEM equity and inclusion programs. She specializes in qualitative methods, gender and race/ethnicity issues in STEM, and higher education. Dr. Ong is a former member of the National Science Foundation’s Committee on Equal Opportunities in Science and Engineering, a Congressionally mandated advisory committee, and she currently serves on the National Academies Committee on Addressing the Underrepresentation of Women of Color in Tech. Prior to her work at TERC, she directed an undergraduate physics program for students of color and women at the University of California at Berkeley; for this work, she co-received a U.S. Presidential Award for Excellence in Science, Mathematics, and Engineering Mentoring. Dr. Ong holds a doctorate in Social and Cultural Studies in Education from U.C. Berkeley.

Currently a faculty member in the physics department at Chandler-Gilbert Community College, Dr. Richardson has had a rich and varied career. She received her physics bachelor’s degree at Grambling State (HBCU), her physics Master’s degree at UT Dallas, a second Master’s degree in materials & engineering, and a PhD in science curriculum, both from the University of Arizona. Dr. Richardson also spent a significant amount of time working as an engineer in private industry before returning to academia. In that time, she has worked with diversity organizations to increase access to science for underrepresented minorities and she is now running as a candidate for the AAPT Board of Directors.

Professor and chair of physics at Howard University, Dr. Williams has a history of leadership in APS, AAPT and AIP diversity efforts. As a former Provost at Jackson State and current physics chair at Howard, he is a staunch advocate for the health and well-being of HBCUs and for their recognition as the leading producers of African American physics bachelor’s degrees. Dr. Williams is a former member of the AIP Governing Board and was a member of the APS and AAPT Joint Task Force on Undergraduate Physics Programs, which recently released their report, Physics 21: Preparing physics students for 21st century careers. Quinton is also a Past-President of the National Society of Black Physicists (NSBP).

Arlene Modeste Knowles is the American Institute of Physics TEAM UP Project Manager. Ms. Knowles selected and convened the TEAM-UP members to execute their charge and complete this project. Additionally, Ms Knowles co-led initial efforts on the development of the SEA Change Physics and Astronomy Departmental Awards and is the 2020 Chair of the American Association of Physics Teachers Committee on Diversity in Physics (CoDP). Formerly, Ms. Knowles spent more than two decades managing and coordinating diversity programs for the American Physical Society including the now retired, Scholarships for Minority Undergraduate Physics Majors, and the National Mentoring Community, a mentoring program to increase the number of minority physics bachelor’s degrees. She advocated for the creation of the APS ad-hoc Committee on LGBT+ issues and worked with them to elevate the presence of LGBT+ physicists within the APS community and produce the first ever, LGBT Climate in Physics Report. Ms. Knowles also served on the Program Management Team of the multi-million dollar grant-funded, APS Bridge Program, and has been instrumental in establishing and advancing several APS diversity initiatives.

Bo Hammer is a Senior Director at the American Institute of Physics (AIP) and the Staff Liaison to the AIP Liaison Committee on Underrepresented Minorities (LCURM). Dr. Hammer, in partnership with LCURM, wrote the proposal to the AIP Board to authorize and fund a national Task Force on the underrepresentation of African Americans in physics & astronomy. Prior to assuming his role at AIP, Dr. Hammer was Associate Executive Officer of the American Association of Physics Teachers and a Vice President at the Franklin Institute Science Museum. Dr. Hammer was an American Physical Society Congressional Science Fellow in the US House of Representatives Committee on Science, and currently serves on the advisory committee for the AAAS Leshner Leadership Institute. He has served on the Executive Board and Council of the APS and was a founder of the APS Forum on Physics and Society. Dr. Hammer is a Fellow of the American Physical Society.