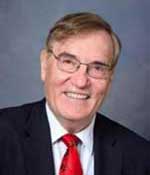 "For his advances in shock-compression science involving phase-transformations, high explosives, and detonation physics; for extensive contributions to the shock physics community through mentorship and teaching; and for service to the Shock Compression Topical Group."