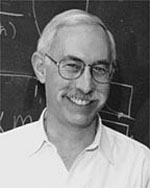 "For the development of optical and infrared ultrafast spectroscopic methods, and especially for experiments using these methods to measure dynamical processes in condensed phase systems."


Dr. Michael D. Fayer received his BS in chemistry from the University of California at Berkeley in 1969 and received his Ph.D. in chemistry from the same institution in 1974. He then went directly from Berkeley to join the faculty of the Department of Chemistry at Stanford University in the field of physical chemistry and chemical physics. He became Professor of Chemistry in 1984. He is a fellow of the American Academy of Arts and Sciences as well as the American Physical Society. He has received fellowships from the Guggenheim Foundation, the Camille and Henry Dreyfus Foundation, and the Alfred P. Sloan Foundation.

Professor Fayer's areas of research involve the development and application of ultrafast non-linear optical and infrared methods for the study of complex molecular condensed matter systems. He developed transient grating methods to study acoustic wave dynamics in crystals, liquids, and thin films; transport processes involving excitons, thermal diffusion in solids and films, and chemical species in gasses and flames; and electronic excited state dynamics in solids, liquids and gases. He developed ultrafast photon echo methods and related pulse sequences and applied them to the study of dynamics in crystals and glasses. He pioneered the application of ultrafast non-linear optical Kerr effect techniques for the study of dynamics in complex liquids. Most recently, he has used ultrafast infrared pulses from a free electron laser and from optical parametric amplifier systems to perform vibrational echo studies of dynamics in liquids, glasses and proteins.