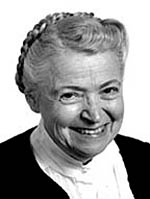 
"For being a compassionate mentor and lifelong friend to young scientists; for setting high standards as researchers, teachers and citizens; and for promoting international ties in science."


Professor Mildred Dresselhaus has an A.B. from Hunter College, 1951, a Ph.D. degree from the University of Chicago (1958), was an NSF postdoctoral fellow (1958-60), and has been at MIT since 1960, beginning as a staff member at Lincoln Laboratory. She joined the MIT faculty in the Department of Electrical Engineering & Computer Science in 1967, the Department of Physics in 1983, and became an Institute Professor in 1985. She has been active in research across broad areas of solid state physics, especially in carbon science. Her present research activities focus on carbon nanotubes, bismuth nanowires, low dimensional thermoelectricity, and novel forms of carbon.