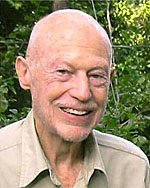 
"For a broad range of original contributions to gravitational physics, especially in quantum gravity, gauge field theories, radiation reaction in curved spacetime, and numerical relativity; and for inspiring a generation of students."


BRYCE DEWITT graduated from Harvard in 1943. During World War II he was a Naval Aviator. He returned to Harvard after the War and did his Ph.D. thesis under the direction of Julian Schwinger. The subject of his thesis, Quantization of the Gravitational Field, occupied much of his research time for the rest of his life. He was awarded the Ph.D. in 1950.

During1949-50 he was a postdoc at the Institute for Advanced Study. This was followed by six months at the Eidgenossische Technische Hochschule in Zurich and by a year as a Fullbright Scholar at the Tata Institute of Fundamental Research in Bombay. From 1952-55 he was a senior physicist at Livermore, where he became an expert in numerical hydrodynamics, which he and his students used later in studies of colliding black holes and other astrophysical investigations.

In 1956 he became Director of the Institute for Field Physics at the University of North Carolina. While at UNC he discovered the properties of Greens functions in curved spacetime, which played a large role later in his studies of the heat kernel, generalizing work of Schwinger. Both the gravitational and Yang-Mills fields are non-Abelian gauge fields, and their quantization requires a set of graphical rules that differ from those of other field theories. By 1961Feynman had discovered the new graphical rules up to one-loop order. In 1964, DeWitt extended these rules to two-loop order, and by the end of 1965 he had determined the rules to all orders. This work involved the introduction of new particles (ghosts), but it did not get published until 1967, for various administrative reasons. During this time he also studied the properties of what is known as the Wheeler-DeWitt equation.

In 1972 DeWitt and his wife, Cecile DeWitt-Morette, moved to the University of Texas. Of the books he published after 1973, the most important is The Global Approach to Quantum Field Theory (Oxford 2003).

DeWitt is a member of the American Physical Society, the National Academy of Sciences, and the American Academy of Arts and Sciences. He has been awarded the Dirac Medal of the ICTP (Trieste), the Marcel Grossmann Prize (with DeWitt-Morette), and the Pomeranchuk Prize.