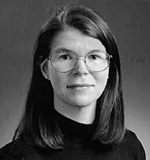 
"For her leadership in experimental neutrino physics, particularly for initiating and leading the NuTeV decay channel experiment and the Mini-BooNE neutrino oscillations experiment, which are noted for their timeliness and significance in resolving frontier issues in neutrino physics."


Janet Conrad graduated from Swarthmore College in 1985. She received an M.Sc. from Oxford in 1987 and a Ph.D. from Harvard in 1993. Since that time, she has pursued research in neutrino physics. As a postdoc, she joined the NuTeV (E815) deep inelastic neutrino scattering experiment at Fermilab. She became an assistant professor at Columbia University in 1996 and an associate professor in 1999. She is presently the co-spokeperson of the MiniBooNE (E898) neutrino oscillation experiment at Fermilab. Janet has received an Outstanding Junior Investigator Award and a Career Advancement Award to construct the NuTeV Decay Channel and a CAREER award from NSF for the MiniBooNE experiment. In 1999 she received the Presidential Early Career Award for Scientists and Engineers. In 2000, she was selected as a Sloan Research Fellow.