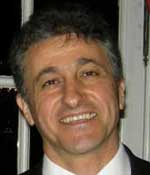 "For developing new methods and redefining the boundaries of molecular spectroscopy through extending the temporal and spectral range, and for his pioneering work in ultrafast X-Ray spectroscopy for studies in solution and the solid state."

Majed is most noted for his contribution to the development of new ultrafast spectroscopic techniques, such as X-ray absorption spectroscopy, UV fluorescence up-conversion and 2-dimensional UV spectroscopy, with which he addressed fundamental questions in the photophysics of transition metal complexes, solvation dynamics, protein dynamics and the charge carrier dynamics in semiconductors and more recently, in metal oxides. His group has recently developed a novel experiment for ultrafast XUV photoelectron spectroscopy of liquid solutions and solids.

Majed is editor in chief of “Structural Dynamics” (AIP Publishing). He received the Kuwait Prize for Physics (2009), the Humboldt Research Award (2010) and the 2015 Earle K. Plyler Prize for Molecular Spectroscopy & Dynamics.