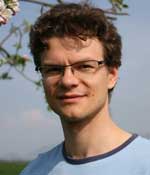 
"For his research on beam loss mechanisms involving ultra-peripheral nuclear collisions in relativistic heavy-ion colliders that are potentially performance-limiting."


Roderik Bruce received a M.Sc. in applied physics from Linköping University in 2005 and continued with a Ph.D. in physics at Lund University completed in 2009. He was supervised by Dr John Jowett and Dr Simone Gilardoni at CERN and Dr Erik Wallen at Lund University. His thesis work focused on beam-loss mechanisms in ultra-relativistic heavy-ion colliders, such as LHC and RHIC, where the charge-to-mass ratio of ions is changed through electromagnetic or nuclear interactions between colliding beams or between beams and collimators. These mechanisms cause localized beam losses that may quench superconducting magnets and therefore limit the peak luminosity. He also studied models of the luminosity time evolution in heavy-ion colliders. The thesis work is reported in 4 publications in refereed journals (Physical Review Letters and Physical Review Special Topics - Accelerators and Beams) and in a number of conference papers. Roderik is presently a research fellow at CERN, working on collimation and experimental backgrounds in the LHC.