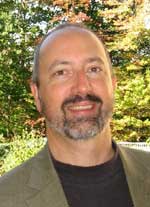 
"For his outstanding contributions to plasma physics made possible by his development of a world-class spheromak laboratory at Swarthmore College, and for his energetic mentoring of undergraduate students."


Michael Brown is a professor of physics at Swarthmore College. Brown's work in plasma physics has focused on fundamental astrophysical processes accessible in laboratory experiments (such as magnetic reconnection, plasma turbulence, and ion energization) and innovative schemes for magnetic confinement fusion.

Brown has established the Swarthrmore Spheromak Experiment (SSX) at Swarthmore College with the assistance of 16 senior honors students and over $2.5M in grants from the Department of Energy and National Science Foundation. His former students include one APS Apker winner and two finalists. He has given invited talks at APS conferences as well as international conferences in Australia, Norway, and Japan. He has given invited lectures at over 50 institutions. He has published over 40 articles in refereed journals with more than 16 undergraduate coauthors.

Brown is a past member of the executive committee of the American Physical Society Division of Plasma Physics and a winner of the Department of Energy Junior Investigator Award. Brown currently serves on the National Academy of Sciences Plasma Sciences Committee. He received his undergraduate degree in physics from Pomona College in 1981 and his PhD in physics from Dartmouth in 1987. He was a senior research fellow at Caltech before joining the Swarthmore faculty in 1994.