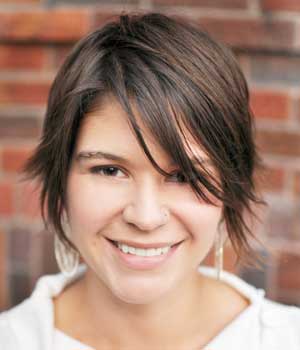 
"For contributions to theoretical astrophysics, in particular, the use of numerical hydrodynamic simulations compared with observations to elucidate the essential physics of galaxy formation."


Alyson Brooks is a theoretical astrophysicist who interprets observational results in the light of galaxy formation theory. She creates some of the highest resolution simulations of galaxies ever achieved, following galaxy evolution from soon after the Big Bang to the present day. Her work has helped to pioneer a revolution in the way that physicists view galaxy formation: the physics of gas and stars can alter the dark matter structure of galaxies. Thus, Dr. Brooks is an expert in both the formation of galaxies as well as astrophysical constraints on the dark matter model. She earned a B.A. in physics from Macalester College in 2000 and a Ph.D. in astronomy from the University of Washington in 2008. She was a Sherman Fairchild Postdoctoral Fellow at Caltech from 2008 to 2011, and the Grainger Postdoctoral Fellow at the University of Wisconsin, Madison from 2011 to 2013, before joining the faculty at Rutgers, the State University of New Jersey. Dr. Brooks is a member of both the American Physical Society and the American Astronomical Society. She has served on the AAS Committee on the Status of Minorities in Astronomy since 2014. She is the recipient of multiple NASA and NSF grants, and was named a 2015 Alfred P. Sloan Research Fellow. She was presented the Outstanding Teaching Award by the Rutgers Society of Physics Students in 2016, and the 2017 Rutgers School of Arts & Sciences Award for Distinguished Contributions to Undergraduate Education.