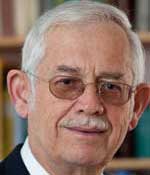 
"For his ground-breaking work on black hole entropy, which launched the field of black hole thermodynamics and transformed the long effort to unify quantum mechanics and gravitation."


Jacob Bekenstein, born Mexico City 1947, became a US citizen in 1968. He obtained his undergraduate and M Sc degrees in 1969 from the Polytechnic Institute of Brooklyn (nowadays the Polytechnic Institute of New York University), and his Ph. D. from Princeton University in 1972 under the guidance of John A. Wheeler. He was a postdoctoral fellow at the University of Texas at Austin, and then faculty member (1974-1990) at the Ben Gurion University in Israel where he became full professor in 1978 and the Arnow Professor of Astrophysics in 1983. Since 1990 he has been at the Hebrew University of Jerusalem (since 1993 as Polak Professor of Theoretical Physics). His scientific interests have included gravitational theory in general, black hole physics (including black hole thermodynamics which started with his work), relativistic magnetohydrodynamics, galactic dynamics, and the physical aspects of information theory. Currently he is interested in designing realistic experiments to explore quantum gravity and in the role of space-time fluctuations in resolving various black hole paradoxes. Bekenstein is a member of the Israel Academy of Sciences and Humanities (since 1997), and has been honored with the Landau Prize (1981), the Rothschild Prize (1988), the Israel National Prize (2005), the Weizmann Prize (2011) and the Wolf Prize 2012.