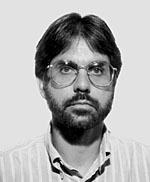 
"For outstanding contributions to the physics of polymer-polymer phase behavior and the self-assembly of block copolymers."

Dr. Bates has investigated a variety of topics related to the thermodynamics and dynamics of polymers and polymer mixtures, including isotope driven phase separation, order and disorder in block copolymers, and critical phenomena in block copolymer-homopolymer blends. He is currently studying non-equilibrium phenomena in self-assembled soft materials in bulk and thin film forms.

Dr. Bates is a Fellow of the APS, a divisional associate editor at Physical Review Letters and President of the Neutron Scattering Society of America. Other memberships include The American Chemical Society, The American Institute of Chemical Engineers, and the American Association for the Advancement of Science. He received a Bell Laboratories Distinguished Technical Staff Award in 1988, the APS John Dillon Medal in 1989, and the George Taylor Distinguished Research Award from the University of Minnesota in 1993.