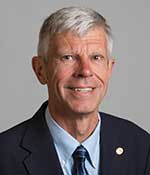 
"For fundamental theoretical and computational contributions to the understanding of charged-particle and photon collisions with atoms and molecules and for providing critical data and insight to the plasma modeling community."


Klaus Bartschat received the Diploma in Experimental Physics in 1981, a Ph.D. in Theoretical Physics in 1984, and the Habilitation for Physics in 1989 from from the University of Münster (Germany). In 1988, he joined the faculty of Drake University, where he currently holds the chair of Ellis & Nelle Levitt Distinguished Professor of Physics. He has been a Visiting Fellow of JILA at the University of Colorado in Boulder, enjoyed several long-term visits at the Institute for Atomic, Molecular, and Optical Physics at the Harvard Smithsonian Center for Astrophysics, and held a Mercator Professorship at the University of Münster as well as Adjunct Professorships at several Universities in Australia. His research focuses on charged-particle collisions with atoms and ions as well as short-pulse intense laser-matter interactions. Bartschat became a Fellow of the American Physical Society in 1999 and was recognized among the inaugural group of Outstanding Referees for the APS journals in 2008.