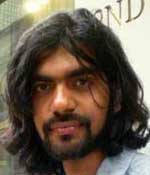 
Shiladitya Banerjee received his Phd in Physics from Syracuse University in 2013. His doctoral thesis research was supervised by Prof. M. Cristina Marchetti. During his Phd, Shiladitya studied the mechanics and shape of living cells and developed theoretical models to describe active stress generation in cells, tissues and their underlying cytoskeleton. The models predicted in a unified manner how intra-cellular force generation is coordinated across tissue length scales and defined their relationships with the extracellular physical properties. In collaboration with the group of Eric Dufresne at Yale University, Shiladitya and coworkers combined theory and experiments to measure and predict an emergent surface tension in epithelial cell layers, thus establishing a direct relationship between mechanical energy and the geometric size in a model tissue. They further showed that cells in a tissue form a mechanically integrated system, where intercellular adhesions organize and coordinate the mechanical activity of cell monolayers, thus playing an important role in the mechanical regulation of tissues during development, homeostasis, and disease. Shiladitya's dissertation also received the All-Univeristy doctoral prize from Syracuse University. Shiladitya graduated with BSc. (Hons) in Physics from Chennai Mathematical Institute (India) in 2008. His undergraduate performance was awarded by a Gold Medal of Excellence in Physics. Shiladitya is currently doing Postdoctoral Research at the James Franck Institute in the University of Chicago.