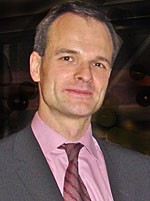 
Aeppli is the Quain Professor of Physics and Head of the Condensed Matter and Materials Physics Group at University College London (UCL), and the Director of the London Centre for Nanotechnology, a joint venture between Imperial College and UCL. Prior to taking up these posts in the autumn of 2002, he was a Senior Research Scientist for NEC (Princeton), a Distinguished Member of Technical Staff at Bell Laboratories, a Research Assistant at MIT, and an industrial co-op student at IBM. He obtained a BSc. in Mathematics and PhD, MSc and BSc in Electrical Engineering from MIT. Honours include the IUPAP Magnetism Prize/Neel Medal (2003), Fellow of Riso National Laboratory (2002), Royal Society Wolfson Research Merit Award (2002), Mildner Lecturer, Department of Electronic & Electrical Engineering, UCL (2002), and Fellow of the American Physical Society (1997). In addition, he has been a member and chairman of many panels, sponsored by the USDOE, American Physical Society, EPSRC, and National Research Council (US), among others. His research interests include magnetism, superconductivity, quantum information processing, nanotechnology, and particle accelerator-based probes of condensed matter.