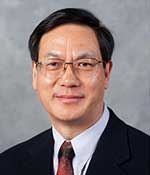 
"For seminal contributions to the synthesis, fundamental understanding, and applications of ZnO nanostructures in sensing, energy harvesting, and piezotronics."


Dr. Zhong Lin (ZL) Wang received his PhD from Arizona State University in 1987. He now is the Hightower Chair in Materials Science and Engineering and Regents' Professor at Georgia Tech. Dr. Wang has made original and innovative contributions to the synthesis, discovery, characterization and understanding of fundamental physical properties of oxide nanobelts and nanowires, as well as applications of nanowires in energy sciences, electronics, optoelectronics and biological science. His discovery and breakthroughs in developing nanogenerators establish the principle and technological road map for harvesting mechanical energy from environment and biological systems for powering a personal electronics. His research on self-powered nanosystems has inspired the worldwide effort in academia and industry for studying energy for micro-nano-systems, which is now a distinct disciplinary in energy research and future sensor networks. He coined and pioneered the field of piezotronics and piezo-phototronics by introducing piezoelectric potential gated charge transport process in fabricating new electronic and optoelectronic devices. This breakthrough by redesign CMOS transistor has important applications in smart MEMS/NEMS, nanorobotics, human-electronics interface and sensors. Dr. Wang’s publications have been cited for over 62,000 times. The H-index of his citations is 121. Dr. Wang was elected as a foreign member of the Chinese Academy of Sciences in 2009, member of European Academy of Sciences in 2002, fellow of American Physical Society in 2005, fellow of AAAS in 2006, fellow of Materials Research Society in 2008, fellow of Microscopy Society of America in 2010, and fellow of the World Innovation Foundation in 2002. He received 2013 ACS Nano Lectureship award, 2012 Edward Orton Memorial Lecture Award and 2009 Purdy Award from American Ceramic Society, 2011 MRS Medal from the Materials Research Society, 1999 Burton Medal from Microscopy Society of America. Details can be found at: http://www.nanoscience.gatech.edu