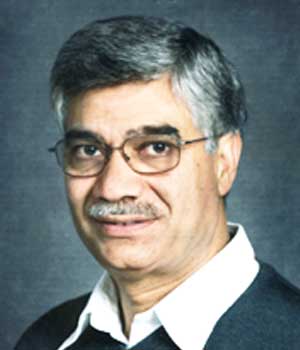 
"For the development of soft x-ray instrumentation such as monochromators and spectrometers for synchrotron radiation beamlines, leading to significant measurement improvements of angle resolved photoemission spectroscopy and resonant inelastic soft x-ray scattering."


Zahid Hussain received his M.Sc./M.Phil. from the University of Islamabad, Pakistan in 1974. He received an East-West Center scholarship to attend the University of Hawaii, Honolulu, where he completed his Ph.D. in 1979 while working with Charles S. Fadley. Hussain carried out postdoctoral research with David A. Shirley at the Lawrence Berkeley National Laboratory (LBNL) from 1979 to 1981. Until 1989, Hussain was faculty at the physics department of the King Fahd University of Petroleum and Minerals, Dahran, Saudi Arabia. He joined the Advanced Light Source (ALS) at LBNL and led the science program as its deputy for scientific support until retiring in July 2018. Hussain established the ALS as the world leader in soft x-ray science and science-driven novel instrumentation, and pioneered the technique of ambient pressure x-ray photoelectron spectroscopy (APXPS) with the use of lenses along with apertures and differential pumping, for which he received an R&D 100 award in 2010. This revolutionary development made ALS the world leader in carrying out in-situ and operando science for the study of gas/solid, gas/liquid and solid/liquid interfaces. He developed spin TOF system for spinARPES, which achieved the highest energy resolution and efficiency of any spinARPES system. Hussain also developed one of the first slit-less and variable grating based soft x-ray spectrometer with high detection efficiency (>100 fold). Hussain has served as a Department of Energy reviewer for LCLSI/LCLSII, NSLSII, and for the Swedish Research Council for MaxIV projects. Thomson Reuters listed him as one of the most highly cited influential scientific minds from 2003 through 2013. Hussain is a fellow of the American Physical Society.