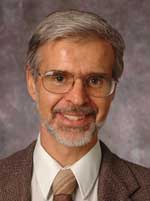 
"For the individual development and collaborative application of fundamental surface infrared spectroscopy and quantum chemical methods to silicon surface reactions important in microelectronics."


Yves Jean Chabal, currently holds the Texas Instrument Distinguished Chair in Nanoelectronics at the University of Texas at Dallas, where he is a Professor and Chair of Materials Science and Engineering with a joint position in Physics. He obtained his B.A. in Physics from Princeton University in 1974 and his Ph.D. in Physics at Cornell University in 1980, under the guidance of A.J. Sievers. He then spent 22 years at Bell Laboratories, where he studied fundamental processes relevant to the microelectronics industry, such as semiconductor surface passivation by gas phase and wet chemical methods, wafer bonding, and molecular hydrogen in amorphous silicon, and developed with Krishnan Raghavachari a mechanistic understanding of hydrogen passivation and oxidation of silicon surfaces. He was then a faculty member at Rutgers University in the departments of Chemistry, Biomedical Engineering and Physics and the Director of the Laboratory for Surface Modification, where he developed in-situ methods to study Atomic Layer Deposition and chemical functionalization of silicon surfaces. He joined UT Dallas in 2008 and works on hydrogen storage, and nanoelectronics. He is a Fellow of the American Physical Society and the AVS, and a member of the ACS and MRS Societies. He received an IBM Faculty Award in 2004 and the Rutgers Board of Trustees Award for Excellence in Research in 2006. He is currently on the MRS Board of Directors and the Program Chair of the Surface Science Division of the AVS.