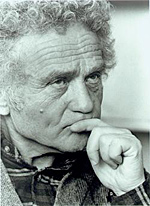 
"For his distinction as a creative physicist and as a life-long, ardent leader in the defense and development of international human rights, justice and the freedom of expression for scientists."


Born in Moscow (1924), Orlov studied physics with Berestetsky, Kapitsa and Landau in the Physico-Technical Institute. After graduating (1952), he joined the theoretical department of the Institute for Theoretical and Experimental Physics and helped design ITEP's proton synchrotron. Fired for a pro-democracy speech (1956), he worked on accelerator physics in Yerevan and Novosibirsk, where he earned two Ph.Ds (Yerevan Physics Institute, 1958; Budker Institute of Nuclear Physics, 1963). At Yerevan he headed the electro-magnetic interaction laboratory, designed the 5 GeV electron synchrotron, became a professor, and publishied pioneering works on nonlinear betatron oscillations (1956), synchro-betatron resonances (1957), radiation decrements (1958), and spin diffusion (1966). Permitted work closer to Moscow, he joined the Institute of Terrestrial Magnetism (1972) but was fired for writing to Brezhnev in support of Andrei Sakharov and glasnost (1973). He helped found the Soviet chapter of Amnesty International (1973), founded the first Helsinki human rights monitoring group (1976), and was arrested for "anti-Soviet agitation and propaganda" (1977). After 7 years in prison and strict-regime labor camp and 2 1/2 years in Siberian exile, he was deported to New York City.

Since 1987 he has produced 85+ scientific publications and technical reports-from the muon g-2 to foundations of quantum mechanics-as Senior Scientist at Cornell University's Laboratory for Elementary-Particle Physics, consultant at Brookhaven National Laboratory, and visiting scientist at CERN ('88-89). His memoir Dangerous Thoughts (1991) appeared in America, Russia, Germany, and France. In 1993 he became an American citizen. Honorary Chairman, International Helsinki Federation for Human Rights and a member of the revived Moscow Helsinki Group, Orlov has continued his human rights activity, campaigning for Russian and Chinese political prisoners, advising Russian human rights organizations, and lobbying for a Bosnian war crimes tribunal. A member of the American Academy of Arts and Sciences and fellow of the American Physical Society, he has received several honorary degrees and human rights awards, including the Carter-Menil Human Rights Prize and the American Physical Society Nicholson Medal.