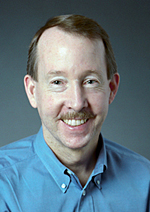 
"For his noteworthy contributions and scientific leadership in the field of neutrino astrophysics, in particular for his success in merging nuclear theory with experiments and observations in nuclear physics and astrophysics."


Haxton received his B.A. in physics and mathematics in 1971 from the University of California, Santa Cruz and his Ph.D. from Stanford University in 1976. He spent a postdoctoral year at Mainz, then seven years in the Theory Division at Los Alamos as a Postdoctoral researcher, J. R. Oppenheimer Fellow, and staff member. He also spent one year as an assistant professor at Purdue University. In 1984 he joined the faculty at the University of Washington, where he is currently Professor of Physics and Adjunct Professor of Astronomy. He has directed the Department of Energy's Institute for Nuclear Theory since 1991.
His research interests include neutrino and nuclear astrophysics, tests of symmetries and fundamental interactions, and techniques for solving many-body problems. He has worked on the solar neutrino problem, the nature of the supernova mechanism, the origin of neutrino-process elements such as boron and fluorine, nuclear and atomic tests of parity and CP violation, neutrinoless double beta decay, and effective theory techniques for nuclear physics. He is a member of the collaboration seeking to establish a National Underground Science and Engineering Laboratory.
Haxton is a Fellow of the American Physical Society and a past Division Chair for Nuclear Physics and for Astrophysics. He is a Fellow of the American Association for the Advancement of Science and the American Academy of Arts and Sciences and a member of the National Academy of Sciences. Visiting fellowships have included the Guggenheim, Miller (Berkeley), and Bethe Lectureship (Cornell).