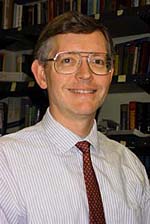 
"For the development of single molecule optical detection methods that remove ensemble averaging from spectroscopic measurements, thereby revealing the behavior of individual molecules; for the application of these methods to the study of spectral diffusion, photon anti-bunching, photon hole burning and intermittent fluorescence in solids, proteins and liquids."


Dr. W. E. Moerner showed multidisciplinary interest from an early age, receiving three bachelor's degrees (Physics, Electrical Engineering, and Mathematics) in 1975 from Washington University in St. Louis. During his graduate study at Cornell University, he received the MS in Physics in 1978 and the Ph.D. in Physics in 1982. He then spent thirteen years as a Research Staff Member, Project Leader, and occasional Manager at the IBM Almaden Research Center in San Jose, California. He received the Roger I. Wilkinson Outstanding Young Electrical Engineer Award from Eta Kappa Nu (1984). After an appointment as Visiting Guest Professor of Physical Chemistry at ETH-Zuerich (1993-1994), he became Distinguished Chair in Physical Chemistry in the Department of Chemistry and Biochemistry at the University of California, San Diego in 1995, and Professor of Chemistry at Stanford University in 1998. He is a Fellow of the American Physical Society and the Optical Society of America, and a senior member of the IEEE.

Professor Moerner's early research at IBM focused on spectral hole-burning optical storage, and in 1989 he was the first to perform optical detection and spectroscopy of a single molecule in a condensed phase system. In addition, he led the IBM team which invented the first photorefractive polymer. Since joining academia, Dr. Moerner's group has explored mechanisms of photorefractivity in polymers as well as room temperature single-molecule spectroscopy and microscopy in crystals, polymers, and biomolecules including the green fluorescent protein and the kinesin molecular motor.